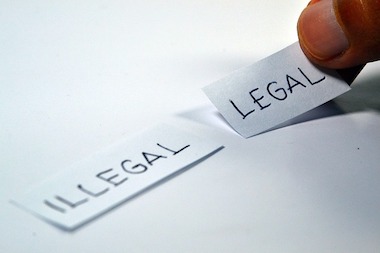 Is CBD Oil Legal In All 50 States? Answered

The United States of America is of course a fantastic country to live in, albeit there are of course issues, just like anywhere else. One of these issues has to do with the legality of CBD and marijuana.

CBD oil is  a fantastic substance with potentially dozens of health benefits, but is CBD oil legal in all 50 states?

This is actually an extremely complicated question to answer, as technically the USA federal government has legalized the production of hemp for farming and manufacturing purposes, and CBD oil does mostly come from hemp.

Generally speaking, yes, CBD oil is legal in the USA, at least federally, but individual states may have different things to say here. It’s a very complicated issue, so we will do our best to explain with minimal confusion.

In 2018 the US federal government passed the Hemp Farming Act which removed hemp and cannabis with less than 0.3% THC from the list of schedule 1 controlled substances.

Keep in mind, according to federal law, only CBD is legal throughout the country, but not THC, so this means that yes, CBD and hemp, as long as they contain practically no THC, are legal across all 50 states.

In 2018, there was over 350 million dollars worth of CBD oil purchased in the USA, whether in storefronts or online.

Even better, people living in the United States also do not require any kind of prescription to purchase CBD.

It Is The Source Of The CBD Which Makes The Difference

Something that does complicate things here is that CBD is only considered legal on the federal level when it is derived from hemp plants and if it contains less than 0.3% THC.

However, if it contains more THC than that, and especially if the CBD is derived from marijuana plants instead of hemp plants, then no, it is not legal on the federal level.

This is of course a bummer for all pot smokers and marijuana enthusiasts out there, and yeah, it gets even more complicated than this.

What gets really complicated about this whole mess is that individual American States have the ability to pass their own laws by themselves, separate from the federal government, and yes, they do indeed often conflict.

Therefore, a State may legalize marijuana for medical or recreational use, or both, but it would still be illegal under federal law.

In other words, local or state authorities won’t come arrest you for selling or buying weed related products, or even for opening up a dispensary, but federal authorities, such as the DEA or FBI, because they are federal agencies, have the power to come shut you down and throw you behind bars. It is a super complicated thing no doubt, and it has lead to lots of confusion.

California was one of the first states to totally legalize weed, and yes, many people starting farming it and selling it, and Californian authorities could not do anything about it, since it was legal.

However, at the same time, the federal government would often swoop in, shut things down, and hand out hefty prison sentences. In short, it’s complicated, it’s unfair, and really, it’s all quite stupid.

In Which States Is THC Legal In? – The Good Stuff!

Alright, so we have figured out that CBD derived from hemp plants, with a THC content under 0.3% is indeed legal in all 50 states.

But, of course, marijuana farming, growing, selling, and consumption, whether recreationally or medicinally, is not legal federally.

The federal government does have the power to hand out fines and prison terms for this.

However, individual US State governments have legalized weed for medicinal and/or recreational use, whereas some have not. Let’s take a look at what’s what here.

States Where THC Fully Legal For Recreational & Medicinal Use

States Where THC Is Not Legal At All, For Any Purpose

So, the short answer here is that yes, CBD oil is legal in all 50 states, as long as it is derived from the hemp plant and has less than 0.3% THC.

However, of course, things get a lot more complicated when it comes to THC and marijuana, especially the very chaotic and dysfunctional relationship between the US federal government and individual State governments.