For the most part, having orange hairs on your weed is perfectly normal, and generally speaking, it just depends on the strain of marijuana you have. However, technically speaking, depending on the circumstance, it can be both good or bad, so let’s take a closer look. Are Orange Hairs On Weed Good Or Bad?

Orange hairs on your really aren’t good or bad. The main reason why most or some weed plants have some or a lot of orange hairs on the buds is simply due to genetics.

Technically speaking, those orange hairs are known as pistils or stigmatic hairs. While the marijuana plant is maturing, the female plant grows a lot of these stigmas in order to capture pollen from the male plants.

Of course, when you were growing marijuana, do not want males pollinating the females, but that is a story for a different day.

These pistils are generally white in color as the plant matures, and then when the female marijuana plant gets close to harvest time, they will start to darken into an orange color, and eventually turn amber or even brown, which by the way things that it’s too late for you to harvest your plants.

However, the pistils do play some role in this. If your marijuana plant or your buds has how do you of orange hairs, it could be an indication that it has a very potent or high THC content, and also has a strong smell.

Do Orange Hairs On Weed Get You High?

To a certain extent, yes, those orange hairs on your weed can get you high. However, as mentioned above, it’s really the calyx and the sugar leaves that contain the most THC and CBD.

That said, those orange hairs really don’t contain all that much THC, so how high they get you is negligible when compared to the rest of the bud.

Reasons Why Your Weed Has Orange Hairs There are a few different reasons why your marijuana may have orange hairs, so let’s take a closer look at the most important ones.

1. It’s Just the Strain and Genetics

The most likely reason why your marijuana plant has a lot of orange hairs on it simply comes down to genetics and lineage.

Keep in mind that at this time there are literally thousands of different strains of marijuana out there, and they all have slightly different appearances.

Keep in mind that good weed should be a fairly moderate shade of green, and many of them will have orange hairs, red hairs, or even purple hairs, and in very rare cases they may have yellow hairs.

However, what it really all comes down to is genetic differentiation. Just like some people are tall, have black hair, or are prone to being a bit heavier than others, so do marijuana strains differ.

2. The Plant Is Mature (Or Was Harvested When Mature)

Another one of the main reasons why your marijuana plant may have a lot of orange hairs on it is quite simply because it was harvested at the right time.

Around seven or eight weeks into the flowering stage of the marijuana plant cycle, those hairs are going to start to turn slightly darker than the white that they were before.

When the marijuana plant is ready to harvest, those orange hairs or pistils indicate just how far along the plant is. You usually want those hairs to be a light or moderate orange color, but not too dark.

3. Your Plant May be Overripe – (If the Hairs are Dark Orange)

What you do need to be aware of here, related to the point discussed above, is that if the orange hairs on your plants are darker, such as amber or even brown, it is an indication that your plant is overripe or over mature.

In other words, you have waited too long to harvest it.

If those hairs turn amber or even dark brown, it’s a strong indication that the THC content of the rest of the marijuana plant has started to reduce, and may have even completely dissipated.

If you get marijuana that has dark red or brown hairs, chances are it’s not going to be very strong at all.

4. It’s How Female Marijuana Plants Reproduce – The Plant May Have Been Pollinated

OK, so this may not apply directly to the orange hairs, but the reason why marijuana plants have those hairs in the first place is because that’s exactly how they reproduce.

Those hairs are there to catch the pollen from the male plant, which is of course how plants reproduce.

However, once again, you obviously do not want your female marijuana plant being pollinated by a male, because that will not result in very good marijuana.

What Strain Of Weed Has Orange Hairs? Let’s take a look at some of the most popular strains of marijuana that have orange hairs on them.

Fallen soldiers is made by breeding Chem D together with mixed cultivars. It has an earthy, spicy, and slightly minty flavor.

If you are looking for a strain that has plenty of orange hairs on it, this is one of the best to go with. If you look at the outside of this strain, it’s almost more orange than it is green.

This is a fairly potent hybrid known for having some pretty strong psychoactive effects.

Another strain that is known for having a good deal of orange hairs, although not as much as the Fallen Soldiers strain, is Chemlato 33.

This is another fairly powerful hybrid strain made by breeding Gelato 33 with Chemdog 707. This strain has a sweet, spicy, and earthy flavor with a very skunky aroma.

This is definitely one of the more colorful strains out there, as it often has purple, green, and blue buds combined with a good deal of orange hairs.

If you are looking for some beautiful light green bud combined with plenty of orange hairs, and you want a fairly strong and tasty hybrid strain, Funky Charms is always a good one to consider.

Funky Charms is made by combining Grease Monkey with Rainbow Chip, and it features a flavor profile of diesel, mint, and citrus.

This is actually one of the more popular strains among stoners on the list today.

Here we have a strain of marijuana that has very bright orange hairs, but also a good deal of red hairs.

Unlike with most weed plants where red hairs indicate being overripe, this is not the case with GSC. GSC is made by crossbreeding Forum Cut GSC with Back Country Cross GSC, and it features a flavor profile that is skunky, sweety, and citrusy.

What’s really cool about this strain is that it also features very sparkly trichomes, and lots of them too.

Mendo Cheese is perhaps one of the most orange strains on the list today. This bud is quite loose and fluffy, with almost more hairs than bud itself.

For this reason, this strain looks almost more orange than it does green. Mendo Cheese is made by mixing UK Cheese with ChemDog 707, a hybrid strain with skunky, herbal, and earthy notes. 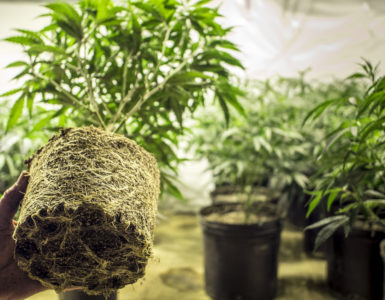 3 or 5 Gallon Pots For Autoflowers? (Answered)

Disclosure: As an Amazon Associate I earn from qualifying purchases. more infoIf you are planning on growing some autoflowering weed plants, then you are set to have some great weed in just a few months’ time. That...

How Big Should My Plants Be After 2 Weeks?

Disclosure: As an Amazon Associate I earn from qualifying purchases. more infoIf you are growing your own weed, then one of the things you do want to keep track of is the size of the plant, as this is a good indicator...

How Long Does It Take To Trim A Pound Of Weed?

Disclosure: As an Amazon Associate I earn from qualifying purchases. more infoGrowing your own weed can of course be a whole lot of fun, and quite rewarding too. That being said, your weed isn’t ready to go once it is...