There are literally hundreds of, if not thousands of strains of marijuana out there. They can have all sorts of sense to. Those terpenes that marijuana contains produce hundreds of different smells. With that being said, sometimes your weed smells like cat pee.

Weed that smells like cat pee is often due mold/ammonia, improper curing or just simply the smell of the strain in question (yes, there is actually strain called “cat piss”). If the weed has mold/ammonia then it should be thrown out, but if it’s due to curing or the strain then it’s perfectively fine to smoke. 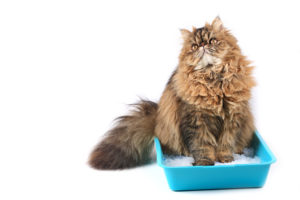 There are a few different reasons as to why your weed might smell like cat pee, so let’s take a quick look.

One reason why your weed might smell like cat pee is because it is going bad. To be specific, it could mean that your weed is going moldy.

Moldy weed does not actually have ammonia in it, but it can smell like it. Damp mold often has a smell similar to ammonia. Of course, either way, you don’t want to smoke moldy weed.

If you see fuzzy white patches on your weed that weren’t there before, then chances are that it is moldy.

Related: How to get rid of mold on your plants.

Another reason why your weed might smell like mold is because of the terpenes that it contains, specifically when your weed is suffering from a so-called entourage effect.

Terpenes are of course what give weed its distinct flavor and aroma. This entourage effect is when various terpenes work together and produce a certain smell.

You could have three terpenes that each have a very distinct smell, but when they come together, they create a whole new smell.

This is often the case with weed, especially when different strains are crossed with each other.

One such terpene known for having a very strong odor is myrcene, and when combined with several other terpenes, often has an ammonia-like or cat pee smell.

Another reason why your weed might have a smell akin to ammonia or cat pee is due to the fact that it was not cured properly.

In order for weed to develop its full flavor and potency, it needs to go through a lengthy curing process.

If weed is not cured properly, the resulting flavor and smell can be very diverse, and sometimes this can resemble ammonia or cat pee.

As we will discuss below, there are also just some strains of weed that naturally have a cat pee or ammonia smell to them.

These are just the specific terpenes that the weed in question has which are causing this smell.

How To Get Ammonia Smell Out Of Weed

The unfortunate reality here is that if your weed smells like ammonia, there’s really not much that you can do. If the weed was not cured properly, you may be able to cure it yourself, although chances are that it is already too late.

If weed has been left to sit for too long after not having been cured properly, there’s really nothing to be done.

You can still try smoking it to see if it isn’t too harsh and still gets you high, although improperly cured weed won’t be all that potent either.

If it is just the strain of weed that smells like ammonia, then you don’t need to get rid of the smell at all. Some strains just smell a bit like cat pee.

Now, you could allow the weed to get really dry, which will remove some of the smell, but allowing weed to get too dry is not good either.

Next, if your weed has a cat pee smell due to being moldy, then you shouldn’t try to get rid of the smell, but rather throw it out altogether.

The smell is coming from the mold, and moldy weed should not be smoked under any circumstances.

Should I Still Smoke My Weed If It Smells Like Ammonia/Cat Pee?

If your weed smells like cat pee due to the terpene profile or because it’s just how the strain is, then absolutely can you still smoke it.

If the weed smells like cat pee due to not being cured properly, this is up to you. You may still get high off it, and also not cough your lungs out.

However, improperly cured weed will be harsh and not all that potent. Whether you want to try is up to you.

If the weed is moldy and produces an ammonia smell, don’t smoke it. Throw it out.

Can You Get Ammonia Smelling Weed Strains?

Ok, so there is indeed one specific weed strain called Cat Piss, and yes, it does smell like cat pee. It’s a moderately strong sativa strain that is made from Super Silver Haze.

There are also other weed strains that have a fairly strong ammonia-like smell, mainly sativas.

So, if the strain of weed you have smells like cat pee, and it otherwise looks and tastes fine, and if it gets you high, then go ahead and keep smoking it.

However, if the weed smells like cat pee due to mold, then unfortunately it is trash-bound. Hay is another common smell that gets questioned a lot, we have covered that separately here.