As you probably know, CBD oil has tons of different benefits for the human body, and this true whether you put it on your skin, ingest it, smoke, or vape it. However, most people will choose to ingest it or put the drops under the tongue. So, what does CBD oil taste like?

Generally speaking, CBD oil will taste nutty or earthy, or a combination of the two, although it does not really have a scent. Some producers do mix other flavors in with it, in which case it will have the flavor of whatever has been added.

Let’s take a closer look at CBD oil, it’s taste, and what different colors mean too. 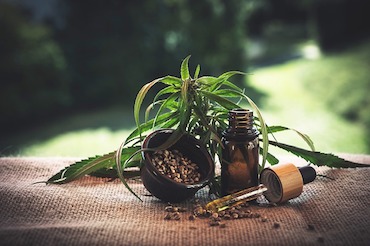 So, does CBD oil have a flavor? It’s a fair question and a lot of people are definitely curious about it. CBD oil does have a bit of a flavor, although thankfully it’s not a bad flavor, or at least most would agree that it is not a bad flavor.

Whether the CBD oil is extracted from the stalks, seeds, or flower or the cannabis or hemp plant, it all tends to taste the same. The taste of CBD oil is usually described as being a combination of earthy, grassy, and very nutty. Now, it definitely doesn’t taste like chocolate ice cream or strawberry short cake, but it is a tolerable flavor.

What you can do, if you really hate the flavor of CBD oil, is to buy it in capsule. It can be purchased in capsule that you simply swallow, which therefore prevents you from tasting anything.

However, that said, the best and most effective way of taking CBD oil is by putting it directly under your tongue, as it absorbs the fastest this way, something you obviously cannot do with a capsule. When you eat CBD oil in a capsule or gummies, it takes a lot longer to digest and take effect.

No, CBD oil does not have much of a smell at all. You might be able to detect hints of that nutty and earthy flavor which we mentioned above, but for the most part, no, you won’t really be able to smell it. In case you are wondering, at this point, police drug dogs cannot smell CBD oil as it has barely any scent to it.

Now, there is a debate to whether or not they could smell it if they were trained to do so. Of course, drug detection dogs need to be trained to pick up on a certain scent so they can detect it and alert the authorities of it.

That being said, some manufacturers do put scents or flavors into CBD oil, sometimes mint, or other such flavors, just to make it a bit more appealing to the nose and taste buds.

This oily coating can take a while to wash away, and due to that layer of CBD oil on your taste buds, it may reduce your ability to taste things, like sweet, salty, spicy, and whatever else, but only for as long as the CBD oil is there.

If you want to get rid of that oily film on your tongue, just drink a few glasses of water or milk. It should do the trick and wash it down. However, no, it won’t alter your taste buds or anything like that, especially not in the long run.

On a side note, if you ingest CBD oil, yes, it is oily, and it will create a weird oily film on your tongue. Many people do not like the texture of it, as it’s more or less like ingesting any other sort of oil, like olive or canola oil.

Yeah, it’s greasy, but it isn’t disgusting, although most would agree that it’s not particularly enjoyable either.

What Color Is CBD Oil? CBD oil, depending on the potency of it, where it was extracted from, how it was processed, and if it is mixed with anything may have a variety of colors. CBD oil can be almost totally clear, it can be golden or yellowish, light or dark brown, and in some cases even close to black.

Let’s take a quick look at the different filtration and distillation methods to get what we know to be CBD oil, and how they affect its final color;

The best and premium filtered CBD oil is going to come in a yellowish or golden color and has a close resemblance to honey. All plant materials and chlorophyll have been removed, and there should be no chemicals or solvents left in it either. This is the best kind of CBD oil you can get.

Brown CBD oil is usually considered to be pretty decent in quality, although nowhere close to as good as yellow or golden CBD oil.

This CBD oil has been decarboxylated to activate the CBD, and THC if there is any, but it has not undergone any further filtration or distillation. It usually contains a good deal of raw plant matter and flavonoids.

Green CBD oil does still have beneficial effects for the human body, although it really has not undergone any sort of filtration or distillation process and is full of chlorophyll, raw plant matter, and flavonoids, which is why it has that green color.

Ok, so there are much clearer CBD oils out there, but they are never actually totally white. You can get fairly clear CBD oil, which is more or less the yellow or gold stuff with even more filtration having been performed on it to remove all coloration.

It usually has roughly the same potency as yellow or gold CBD oil. That said, there is a process which turns clear or yellow CBD oil into a pure CBD powder, which is more or less white and often used when making edibles.

To be clear, CBD oil on its own is bioavailable, which means that by itself, your body cannot actually absorb it. CBD oil needs to be in the presence of fat for the body to be able to process and use it.

This means that CBD oil needs to be mixed with some sort of carrier oil, a fatty oil which can bind with the CBD oil, and thus allow your body to absorb it.

Some of the most common carrier oils which are mixed with CBD oil include hempseed oil, coconut oil, olive oil, avocado oil, and grapeseed oil.

Yes, CBD oil is a type of oil, something made from a naturally occurring substance, in this case the marijuana or hemp plant. Just like any other kind of oil out there, whether olive, canola, grapeseed, or anything in between, CBD and THC oils can both go bad.

Generally speaking, depending on the quality of it, the purity, and the storage method, most CBD oils will have a shelf life of 12 to 24 months. If you store it in a cool and dark place, it will last longer than when exposed to higher temperatures and light.

Something to note here is that when we say a “cool” place, we mean between 60 and 70 degrees Fahrenheit, but you don’t actually want to put it in the fridge. Slightly lower than room temperature will do just fine. In other words, do be mindful of shelf lives and expiry dates when purchasing CBD Oil.

Before we finish off for the day, let’s just mention that there are fake products out there, or in other words, fake CBD oil. If you find CBD oil that is homemade, does not come in one of the regular colors, or makes outrageous claims in terms of benefits, chances are it is phony.

So always be careful where you buy it and who you buy it from. The most trusted name brands will actually do third party laboratory testing on their products and they will post the results. Anyway, CBD oil doesn’t taste great, but it’s not terrible either, and well worth the numerous benefits it provides us with.